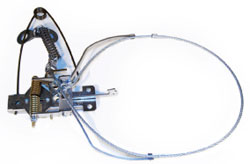 The Collarum® is one of the best and most humane canine capture devices on the market. The Collarum® throws a secure, non-choking cable loop over a canine's head and around the neck making capture faster, easier and more effective than ever before. Triggering requiries a "bite & pull" action, which makes the Collarum® canine specific. It won't be set off by other wildlife.
Unlike other canine capture devices, Collarum® delivers three major advantages.

Sort by Position: Low to High
24 Per Page